Donovan Scherer’s Studio Moonfall is located at 5031 Seventh Ave. in Downtown Kenosha.
Studio Moonfall is open Mondays – Wednesday with “Mystery Hours” (announced on Facebook and Instagram), Thursdays and Fridays, 10am – 7pm, Saturdays 3pm – 7pm, and Sundays 10am – 3pm. Also stop by the Studio Moonfall booth every Saturday at HarborMarket from 9am – 2pm. 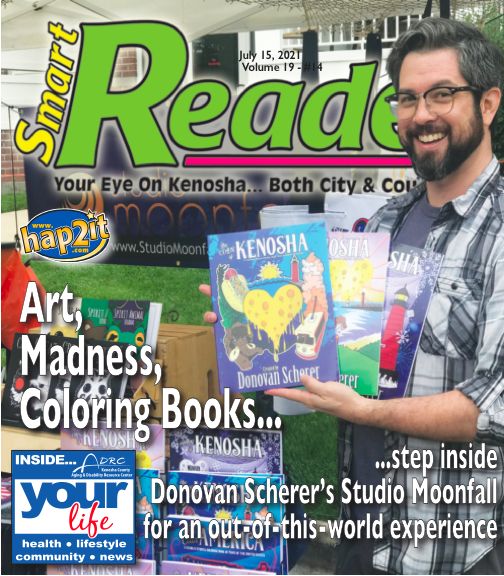 Kenosha is filled with hidden gems and surprises, and one of those gems can be found in our very own downtown! I spoke with author, illustrator, and downtown business owner Donovan Scherer, and he explained how he got into the field of creating and selling all-ages coloring books.

“Before I started writing the chapter books for the Fear & Sunshine series [an original book series created by Scherer], Sunshine’s adventures began with little coloring/activity books with her doing things like helping Frankenstein find his brain or getting candy for Chupacabra so he’d stop eating all the local goats,” Scherer recalled.

Then, after this reflection he remarked, “Eventually, I’ll get back to writing that series and more, but in the meantime, drawing up coloring books are a fun way to come up with weird characters or to help local businesses promote themselves like with the Color of Kenosha series.”

As someone who was unfamiliar with the Color of Kenosha series, I asked if Scherer could further elaborate on it for myself and anyone reading who may be unfamiliar with it as well.

“The Color of Kenosha is like an illustrated business directory of some of your favorite places in Kenosha County. I started it as a way to give people something fun to do everyday while we were all closed down last year and to remind them of the places that’d be waiting for them when everything opened back up.”

I was then curious to know if there was another Kenosha book in the works and if new businesses could get involved, to which Scherer happily replied, “Yep! I’ll keep the series going until we get every place in Kenosha included! Signups are open for businesses to get into the next book which I’m aiming to have out in October. All the details are at www.colorofkenosha.com.”

In addition to coloring books and his Fear & Sunshine series, Scherer has many other projects going on to keep him busy.

“Along with the coloring books and the Fear & Sunshine series,” he began, “I’ve got a book of short stories called Monsters Around the Campfire, all sorts of artwork that I put on prints, stickers, t-shirts, and more, and I’ve published a bunch of journals so that people can fill them up with their own stories and doodles.” 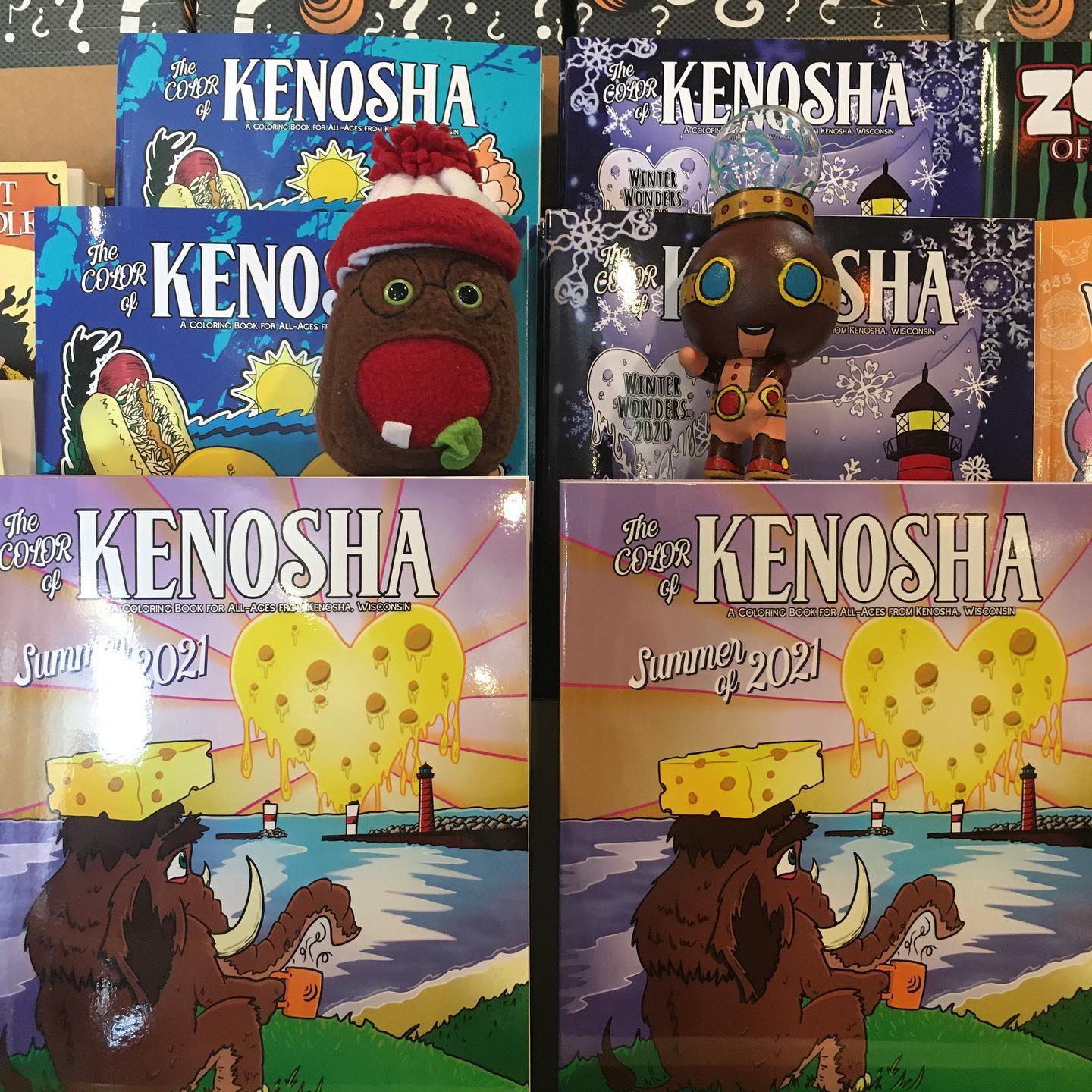 This all sounded incredible to me, which led to my asking of where one could purchase some of these works, to which Scherer responded, “Did I mention I have a bookstore? Since I started publishing the books, I’ve been selling them online or bringing them out to people at Kenosha HarborMarket and comic conventions. In September 2019, I opened up a storefront for Studio Moonfall at 5031 7th Avenue right next to the west entrance to Oriental Inn.”

Now, if you go to Studio Moonfall, you will not only find Scherer’s work, but material from other artists as well.

“Along with the books I’ve published, I feature other indie authors, artists I’ve met through comic cons, and all sorts of oddball monster things. There’s also a huge selection of used books. So huge that I do a Free Book Day every Sunday!”

After hearing this I wanted to know why Scherer chose to open his store in Downtown Kenosha; did he have ties here or was it by happenstance?

“My family is originally from here,” Scherer noted, “But I was a Navy brat growing up. We moved from Kenosha when I was around 5 or 6 and lived in Washington, Japan, Virginia, and Illinois. Then, [we] moved back here when I was 15.”

He then went on to say, “I opened the shop to have something to fall back on in case, for whatever unlikely reason, comic cons all disappeared one day. Lucky timing, I suppose. For opening in downtown, it’s great to be near so many things that bring people around but I’m also just enough off the beaten path that I can still get plenty of drawing done.”

As someone who has never visited the Studio Moonfall building (yet), I had no clue what this store looked like or what one should expect upon arrival. So, I asked, to which Scherer answered, “Think indie bookstore with a strong emphasis on indie. This is a place where you’ll be able to find your next favorite author or artist and we’ll point you in the direction where you can support them in the best way there is so they can keep making more of the stuff you love. Multi-dimensional portal to imagination would also be accurate.”

So because I recalled him mentioning his presence at the Kenosha HarborMarket, I wanted to circle back to that, because the market is something that I frequent regularly and I wanted to know if he could be found there weekly. Scherer stated that, “I’ll be out at the market through August this year. Haven’t figured out what’ll be happening after that.”

Now if you’re a fan of seeing Scherer’s work at the market, don’t get too sad just yet. For after his previous statement he asked,

“What do you think about a month-long Halloween costume contest during October at Studio Moonfall?” So, I wouldn’t count him out of this year’s markets just yet.

This isn’t your typical 9 to 5 job, so I asked Scherer if he had any interesting stories or experiences that have come from this line of work.

“When I first started promoting my books, I made a bunch of buttons with the emblem from the series and packaged them up with a bookmark to download Fear & Sunshine: Prelude for free on Kindle -which you can still do. Me and my friends went to one of the comic conventions in Chicago before I had started vending at them myself, and were handing out the buttons to everybody. I figured it’d be a great idea to get them to the celebrities that were there so they’d check it out, fall in love with the story, want to be in the eventual movie, and help get it made. I got one to Lori Petty who played Tank Girl. Sure, she had a confused, what-did-this-stranger-just-hand-to-me look, but I’m sure she immediately read the book and told her agent about it,” he joked. “But when I went to give one to Lou Ferrigno, the Incredible Hulk, he simply held up his enormous hand to stop me, shook his head, and sent me on my way.”

However, despite this, Scherer did not lose hope, claiming, “One day, I’ll shamelessly self-promote my books to you, Lou.”

So, if you are looking for a good way to have fun and de-stress, be sure to fill in the illustration Scherer created today for a chance to win our coloring contest! Also, be sure to visit studiomoonfall.com or visit the Studio Moonfall building itself to support this local artist before he makes it big after shamelessly promoting his books to Lou.

This story originally appears in the July 15th, 2021 print edition of The Smart Reader magazine. 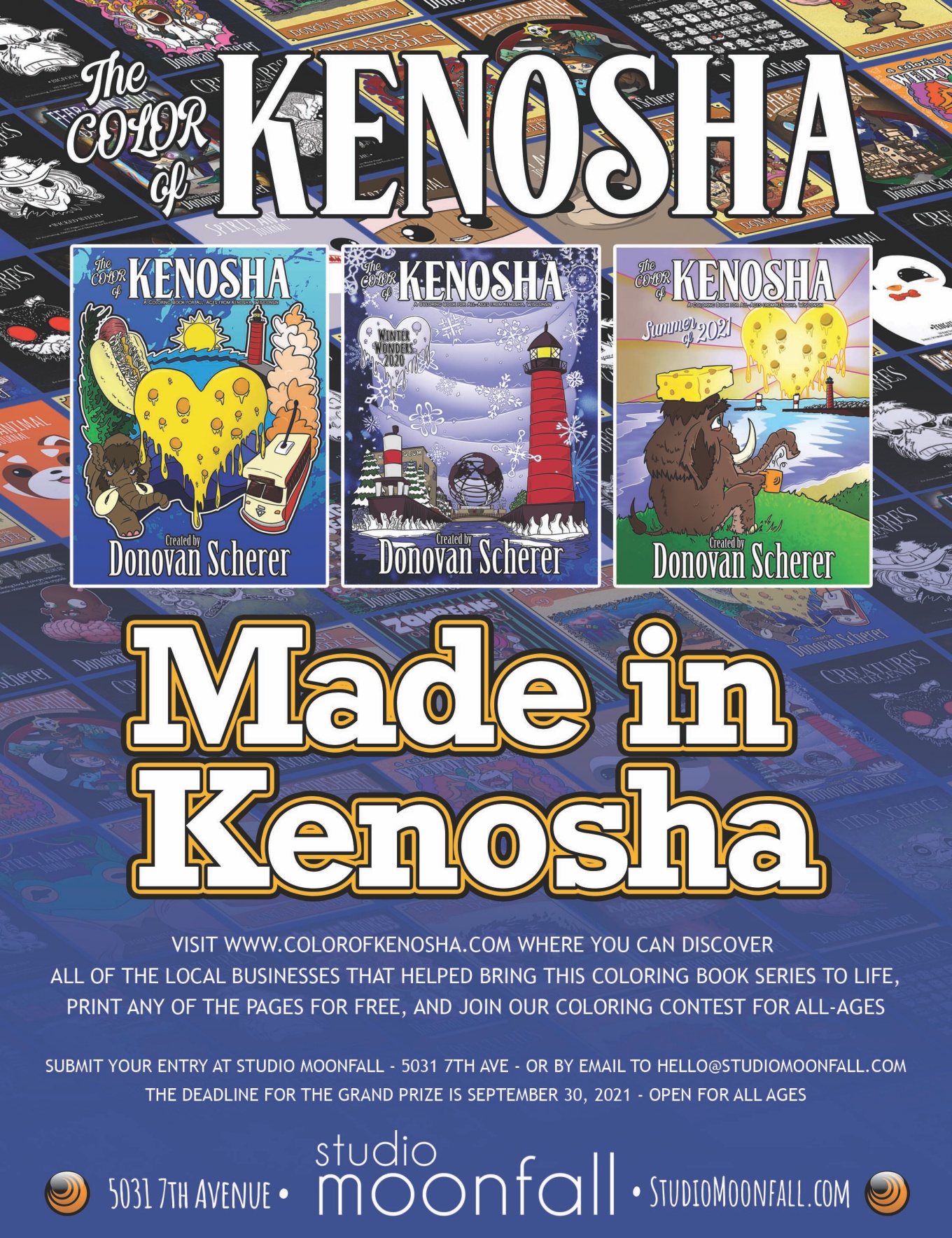 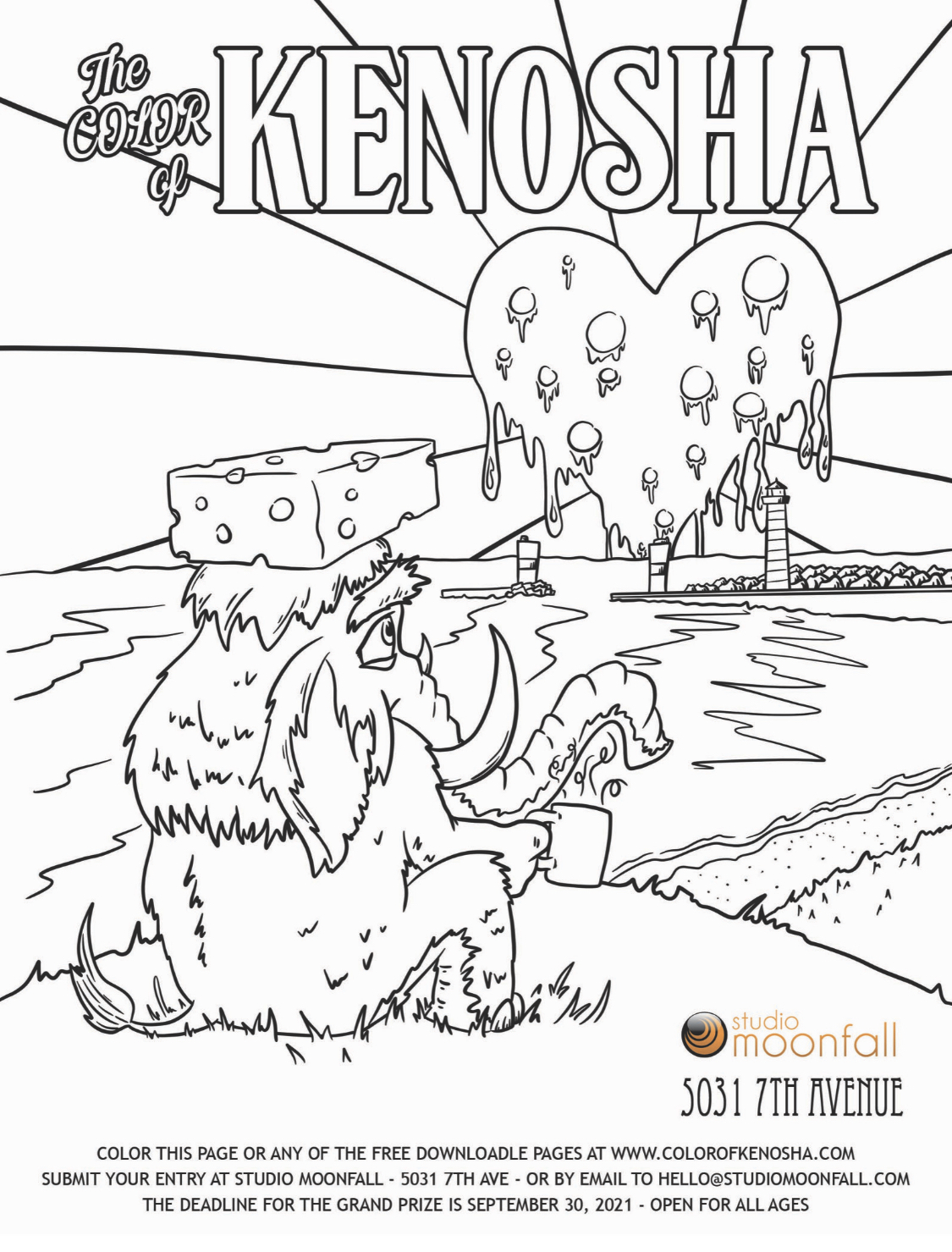